Back in July we worked with Mind to organise the Mind Hike 2016 – Offa’s Dyke Challenge. Here is participant Jon William’s account of the 24 hour challenge on the English/Welsh border!

A month after the event, and the memories of Mind Hike 2016 are still with me and bringing a smile to my face. During the course of the hike I met some absolutely fantastic people and despite heading into the hike with some hesitancy, I can honestly say I had a great time. Most importantly of all though, we all did a great job of raising money and awareness for such a key cause. I signed up to the Mind Hike 2016 in the December of 2015, after coming across the advert via the Mind Facebook page. I had previously completed RideLondon for Mind and was looking for something a bit different. It was with rose-tinted memories of Duke of Edinburgh expeditions and the fun of trekking that I decided a 24-hour trek sounded like just the ticket and so had no hesitation in signing up. 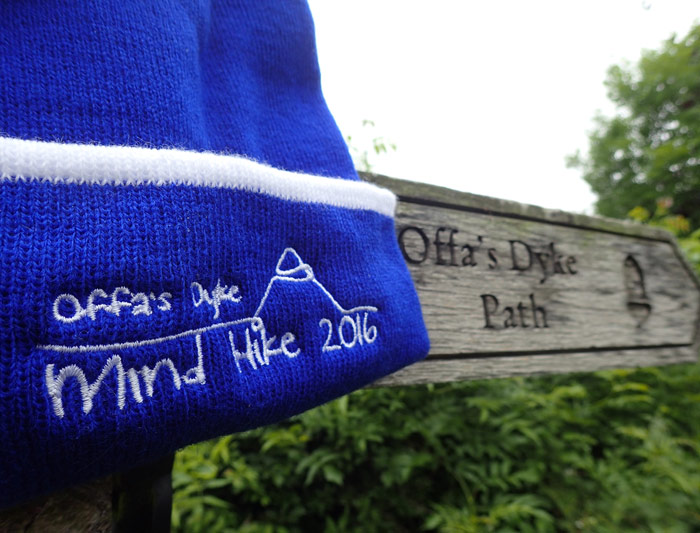 The hike came with the added bonus that is was an event exclusively for and organised by Mind. I have long supported Mind and try to get as involved as I can. For me this is a very personal cause as I myself am in a long battle with depression and its ally, anxiety. In the course of my first degree these two took me to some very dark places and the work and support of Mind and other similar organisations meant that no matter how bad it got, I was never alone in the darkness. This is why I think the work of Mind is so, so key to progress in mental health. Until we can say that truly no one has to face a mental health issue alone we need organisations like Mind in our corner reminding us that no matter how bad it gets, it can always get better.

So I committed to the hike in December and very quickly received all sorts of fundraising tips and materials from the fantastic team at Mind. I’m sure if you ask anyone from our hike they can all tell you about how amazing Emily and Alexa (our Mind Hike 2016 event team) were, with so many supportive emails and updates (and even care packages!) coming our way in the months before the hike. There was always a friendly face at the other end of any emails or calls in the build up to the event and I really can’t speak highly enough of those two. 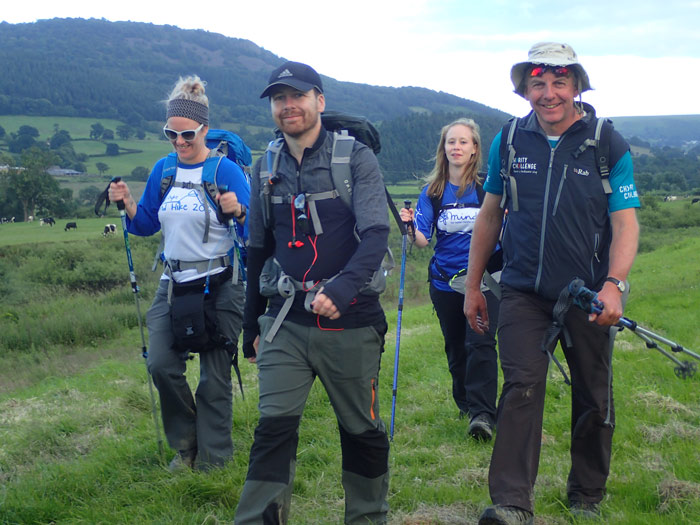 As the hike came grew near we were given two teams, to walk from opposite ends of an 80-mile stretch of Offa’s Dyke on the English-Welsh border to meet in the middle after 24-hours of walking, Team Lion and Team Dragon. I was part of team dragon who were to walk from the North downwards, taking in a slightly hillier route. We all began to introduce ourselves via a Facebook group set up by Emily and Alexa and already there was so much support and community between us all. Helpful tips were shared, and supportive messages were sent to trekkers when they found things a bit tougher going.

Before I knew it, the weekend of the hike was upon me. Suddenly the reality of it was upon me. I was going to have to walk 40-miles in 24-hours with a group of 20 people I had never met (there had been a training day organised by Emily and Alexa, but I unfortunately hadn’t been able to attend). On the train journey there I was admittedly nervous, but part way on the journey I met Emily and Alexa and Maria (another Mind team member) and they were so lovely and welcoming and we got chatting and before I knew it the journey was over; nerves were a distant memory.

We met on the Friday at the hotel we’d have for two nights (with only one of them being spent actually in the bed) and got a chance to meet all of our teams. I have to say my nerves were completely unjustified. Everyone was so lovely and even the hotel staff were getting into the atmosphere of camaraderie. Some of us even grabbed a beer or two as we watched the Wales-Belgium quarter final of the Euros. There was an air of excitement and we couldn’t wait to get started.

Unfortunately, that didn’t quite translate to as much enthusiasm with the 6am alarm clocks the next morning. Breakfast was lovely and once we got coffee and food into our systems people started to perk up. The two teams assembled for a quick photo before parting ways and heading to our starts points for our 8am set-offs. The journey over was a chance to do some more meeting of team members and the mood just got better and better.

As for the hike itself, it wasn’t exactly what I expected it to be. It’s fair to say that with a 24-hour hike there are many parts that are exactly as you might expect. There’s the highs of the amazing views and summits conquered, and the lows of being caught in a torrential downpour and the realisation at about midnight that this is far from over. But the thing that really comes out of it all is the feeling of being a team. Through all of the swings of the hike, there was a real feeling of being in it together and there would always be someone that would help out when emotions were running high. I can honestly say that I met some lovely people and that’s what will stick with me for many years to come. It sounds like a cliché, but the conversations you have at 3am on a Welsh hillside really do bring people together. I think our team left knowing more about each other than many of our friends. Unfortunately owing to an early sudden downpour, our team ended up having to split into two smaller groups for safety. However, through some cunning route alteration by the mountain leaders we were able to merge up again on the walk into the finish and so we reached the line in the same manner as we completed the hike, as one. 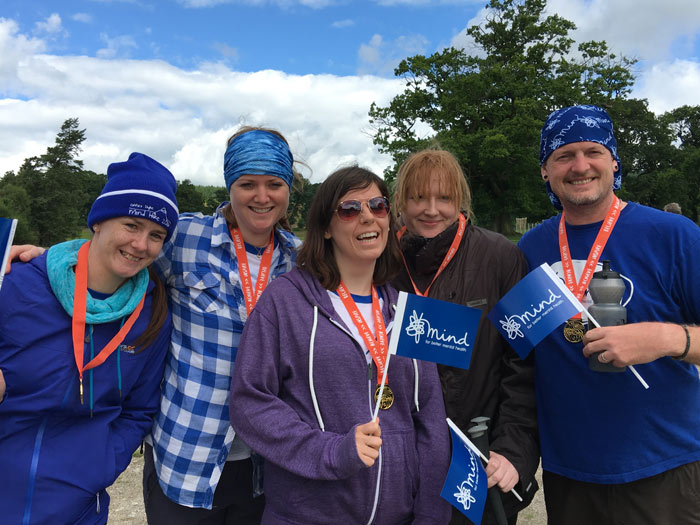 For me, the hike was a brilliant experience, my personal highlight being the amazing views we got when crossing a welsh valley by walking across an aqueduct! To anyone thinking about signing up for Mind Hike 2017 I would say absolutely go for it. It’s an amazing experience and you will get to meet some amazing people whilst making a real difference to a crucial cause. I wouldn’t worry too much about it sounding daunting. The Mind team are so supportive, and unlike a marathon this event is more about determination and teamwork than it is about competition and being fit. A bit of practice for longer walks should be enough and the way we approached the walk was about making sure as many people as possible could enjoy the walk as much as possible. This was really helped by the girls at Mind (who even did part of the hike with us, or in Emily’s case the whole thing) who did everything they could to support us, and the mountain leaders who were an endless source of stories, smiles and most importantly food (they even had a doctor on hand to deal with any blister emergencies). All in all, it was a fantastic experience and a great way to raise money for such a crucial cause. 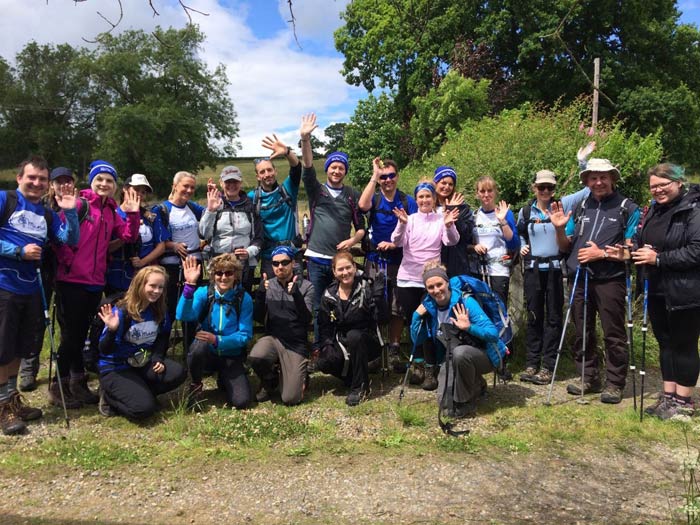 Inspired? You can sign up to the Mind Hike 2017, a 24 hour trekking challenge through he beautiful Lake District! See our website to find out more.

Charity Challenge Operations Manager Jo experiences India for the first time on our secluded ‘Trek to the home of the Dalai lama’ challenge!